Lithium X develops Sal de los Angeles lithium resource with all permits in good standing, and with no well blow-outs

Paul Matysek, Executive Chairman of the Board of Directors of Lithium X, commented “The positive results from our recently completed work program both expand the known brine areas to the north, past our current resource boundary, and confirm positive conditions for the establishment of a well field. Once all samples have been received we will have all the necessary information to complete a comprehensive dynamic model of the entire basin to support a feasibility study and reserve estimates. We are very pleased to have successfully demonstrated potential resource expansion and favourable well-field conditions.”

Three diamond drill holes were completed to bedrock depths covering the northern basin extension defined by the previously completed seismic survey. (Refer to Figure 1:  Sal de los Angeles Drill Program, which can be found on the Company’s website at www.lithium-x.com).

DDD-09, drilled in the center of the northern basin extension intersected 564 mg/l Li over 179.5 metres starting at 84 metres below surface. The horizon is comprised of a single aquifer dominated by sands and gravels down to the basement interface at 244 metres, where highly fractured bedrock material hosts brine down to 263.5 metres. Brine sampling was conducted using drive point technology to ensure in-situ sampling and corroborated using a packer system.

Diamond drill holes DDD-08 and DDD-10 were drilled on the edges of the northern basin extension and intersected the same sand and gravel dominated aquifer. The drill holes intersected brine intervals of 400 mg/l over 7.5 metres and 581 mg/l over 68 metres. Average magnesium to lithium and sulphate to lithium ratios in the three drill holes range from 3.5 to 4.1 and 9.1 to 14.0 respectively, showing very similar brine characteristics to established resource brines. These drill holes successfully demonstrate brine continuity throughout the northern portion of the basin all the way to the basin margins.

Drill recoveries during the program ranged from 40% to 100%, showing a marked improvement over historical recoveries in the basin. 93 samples consisting of 15 cm intervals of drill core were collected and sent from Relative Brine Release Capacity (“RBRC”) testing. RBRC testing provides valuable porosity data to help determine specific yield of the aquifer materials.

Two sonic drill holes were completed within known resource limits. DSO-01 was drilled just north of the salar surface where the proposed well-field is contemplated. The hole was drilled to the rig’s maximum depth of 179 metres, encountering brine from 47 metres below surface to the end of the hole. The 132 metres intersection averaged 571 mg/l Li with the bottom 54 metres averaging 637 mg/l Li. Magnesium to lithium and sulphate to lithium ratios averaged 3.5 and 9.6 respectively over the 132 metre brine column. DSO-01 intersected a single aquifer dominated by sands and gravels, lithologies typically possessing favourable pumping conditions.

DSO-02 was drilled in the southern portion of the basin, with the primary purpose of providing additional stratigraphic and porosity data in order to enhance the confidence level of this area, where a large portion of the inferred resource is located. Both sonic drill holes averaged over 87% recovery and a total of 76 samples were sent for RBRC testing. Final brine sample results for DSO-02 and all RBRC results have not been received by the Company. These additional results will be released as received by the Company.

Further to false rumours circulating, the Company can confirm that sustained artesian conditions resulting in well blow-outs were not encountered during this drill program nor during any other activities on the Project during Lithium X’s ownership or control of SDLA.  All permits received in regards to the completed work programs (drilling, pumping tests, and seismic surveys) and the construction of the Initial Ponding Facility are in good standing and have not been revoked, suspended or in any way materially affected by any government agency or other authority. The Company continues to develop the Project in accordance with these permits.

The technical information contained in this news release has been reviewed and approved by William Randall, P.Geo, who is a Qualified Person as defined under NI 43-101.  As Vice-President Project Development of the Company, Mr. Randall is not considered independent. The drill program was jointly designed and supervised by the Company and FloSolutions Chile. 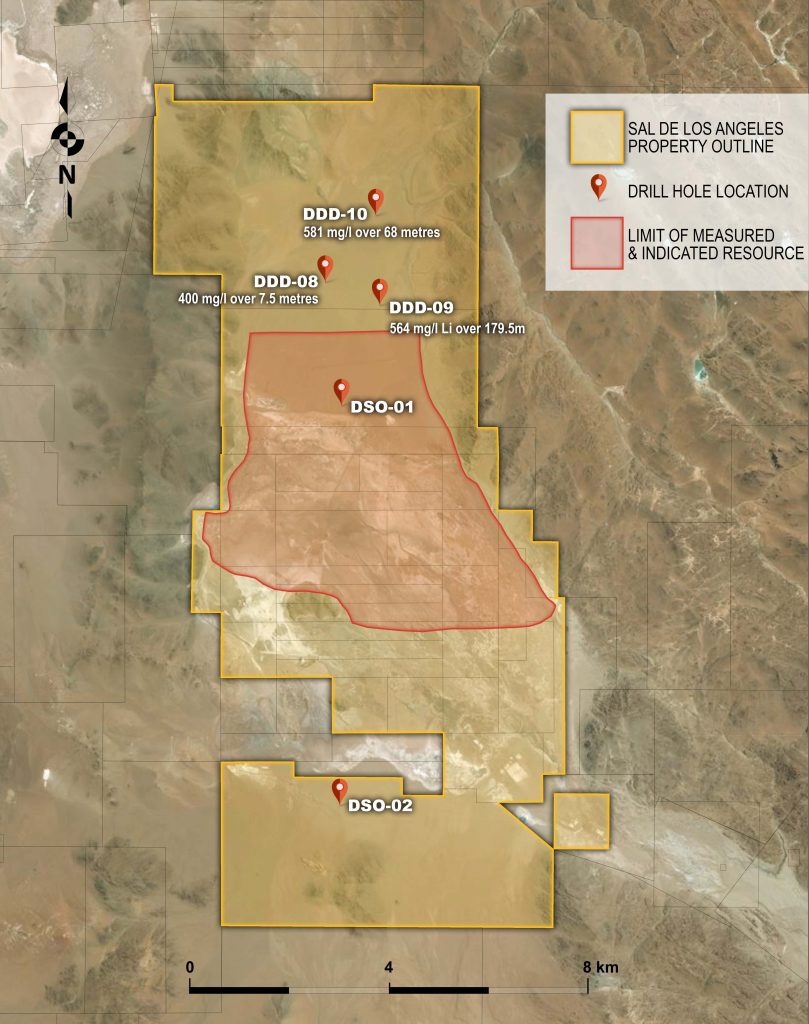 Lithium X Energy Corp. is a lithium exploration and development company with a goal of becoming a low-cost supplier for the burgeoning lithium battery industry.  The Company holds two projects in in the prolific “Lithium Triangle” in mining friendly Salta province, Argentina as well as participating in the Clayton Valley in Nevada through its ownership interest in Pure Energy Metals (“Pure Energy”). The Company’s wholly-owned flagship project is the Sal de los Angeles lithium brine project.  The project consists of 8,154 hectares covering 95% of Salar de Diablillos, and has a 43-101 mineral resource estimate of 1.037 million tonnes of lithium carbonate equivalent in the indicated category and 1.007 million tonnes of lithium carbonate equivalent in the inferred category.  The Company’s second Argentinian project, the Arizaro lithium brine project, consists of 33,846 hectares covering part of the western and eastern portions of the Salar de Azario, one of the largest known salt lakes in the world.   In Nevada, the Company consolidated its Clayton Valley holdings with those held by Pure Energy, in the process becoming Pure Energy’s largest shareholder, holding 19.9% of Pure Energy’s outstanding common shares and share purchase warrants that, if exercised immediately, would increase its ownership interest to 22.5%. Pure Energy’s combined holdings in Clayton Valley consist of more than 10,500 hectares (approximately 26,300 acres).

ON BEHALF OF THE BOARD OF DIRECTORS